First Impressions (Or 'what on earth am I doing here?')

Twenty faces, waiting, watching expectantly. Pens poised in anticipation. In fact some have already neatly and precisely copied the rough introductory information that I had scrawled across the blackboard while I nervously waited. The air in the room is stifling, the moisture suffocating. The wooden shutters are open wide but there is not a breath of movement in the air. Beads of sweat form on my upper lip, I wipe them away anxiously. A droplet of sweat runs down the centre of my back. I look out at the faces. They're not bothered by the warmth in the room, some of them are wearing jackets, all of them are wearing crisp, clean shirts. How do they keep everything so clean with so much dust? My summery blouse and skirt seem shabby in comparison. My heart races and I'm not sure whether it is to do with the heat or my nerves. I suddenly have the urge to flee. What am I doing here? It's too hot. What am I doing here? I'm too young and inexperienced, and a foreigner. What right do I have to be here with my big ideas and my small class sizes and my fancy resources?

...7.30am.  I take a deep breath and complete a traditional Khmer salutation. 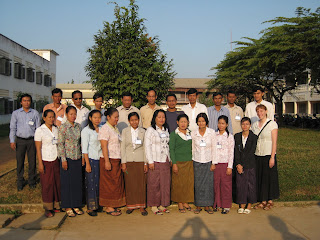 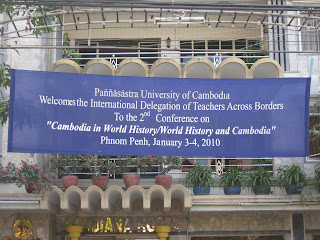 (This banner is for us, kind of. It was on the front of our hotel in Phnom Penh. I think they make banners for anything and everything and there were a couple of teachers here for the conference, but most of us were there for the other program)

The internet access is not as good in Battambang as Phnom Penh so I'm limited in what I can do.
Here is a quick update.

After spending a few days in Phnom Penh relaxing and doing touristy things. We met up with the rest of the team and travelled to Battambang yesterday.When we arrived we met our interpreters. I have a man called Sinourn ( not sure if that is the correct spelling). He teaches English at the teachers college, but don't let give you a false senseof  how good his English is. Last night we had dinner with the inteprereters and some other staff members from the college.


I dídn't sleep very well last night because I was anxious about the workshops, but I'm feeling much better now that I have one under my belt. We had an early breakfast and arrived at the college by 7.15 am ( The workshops run from 7.30-11.30). There was an official opening ceremony where the 300 participants were there, staff from the school and the representative from the government. Most of the speeches were in Khmer so I'm not sure what it was all about. 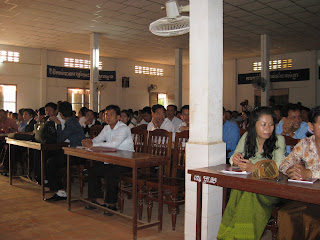 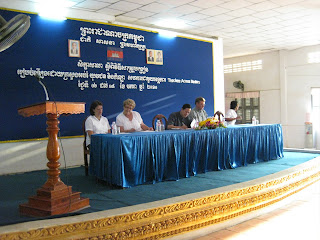 The first workshop went o.k I think. I have 20 in my group. All of the teachers teach in a high school and most of them teach Khmer literature. I have a mix of ages from a first year out to a lady that has been teaching since the year I was born. They relaxed and got involved pretty quickly which was good. I've had to scrap the word literacy, because they don't have a word that matches what we mean by literacy. For them its just reading and writing. I asked them for feedback about the types of things thath they wanted to learn and even though they don't use the same terminology, the things that they were asking for are down the same line as things that I was thinking of and had planned. So that has made me feel a lot better. Working with a translator is a challenge but we're getting used to working together, I just have to remind myself to slow down and talk in short chunks. There are 2 other people in the group who also have o.k English which is a help. I'm practising my Khmer on them and I think it has won them over, they think that I'm a great joke lol.

All in all, I'm happy about how it went and feeling much better about the rest of the program. Tomorrow is a public holiday so there are no workshops. We go back on Friday and Saturday. I think we will get some sight seeing down in the afternoons, but I think today might just be a day of rest. We're pretty worn out.
Posted by Em at 4:55 PM 4 comments: Links to this post

Em
Hi I'm Em. My life is a messy mix of work, ministry, study and family. I'm married to Tim and mum to Master Three and his baby twin sisters.

A Heart for Freedom: The Remarkable Journey of a Young Dissident, Her Daring Escape, and Her Quest to Free China's Daughters
by Chai Ling

The Drop
by Michael Connelly